Welcome to A Sheekey Science Blog!

Promoters as tumour suppressors: MYC vs. PVT1 for gene expression

GUARDIN the genome; a lncRNA unites p53, telomeres and miRNAs

Putting U in the tail of mRNA

Translating into the new year. A new role for eIF4A and more methyl modifications

ChIPping transcription: how to map R-loops

Promote the enhancer to enhance the promoter

Imaging RNA in a cell with Corn

Time to re-write the textbooks? How DNA is really packed inside the nucleus.

Get transcribed in style: The CTD that everyone’s talking about

Centrosomes, not centromeres, and error-correcting kinetochores

How to revise biology: remembering abbreviations

Wondering “how I am going to afford that?”, breaking something valuable or moments before an important talk/interview are just a few moments where one can become stressed. However, stress to a cell is very different. Have you ever stressed about whether a protein was folded correctly, if there are breaks in your DNA, or whether your calcium levels were too high? Okay, well maybe you have, but for a cell, they stress about this a lot and for good reason. Like a glass of wine, some meditation or binge-watching Netflix, a cell has its own plethora of mechanisms to deal with stressful situations. These stress responses help to bring the cell back to normal and prevent it getting into trouble. One form of stress for a cell is erosion of telomeres which can result in replicative crisis and cell death. Defective cells that do not stall and die at this stage can cause tumorigenesis. But what causes the cells to die? A recent paper published in Nature by Nassour et al. 1 now show that autophagy – a cellular eating and recycling process – is key to keeping cells from this continued proliferation. 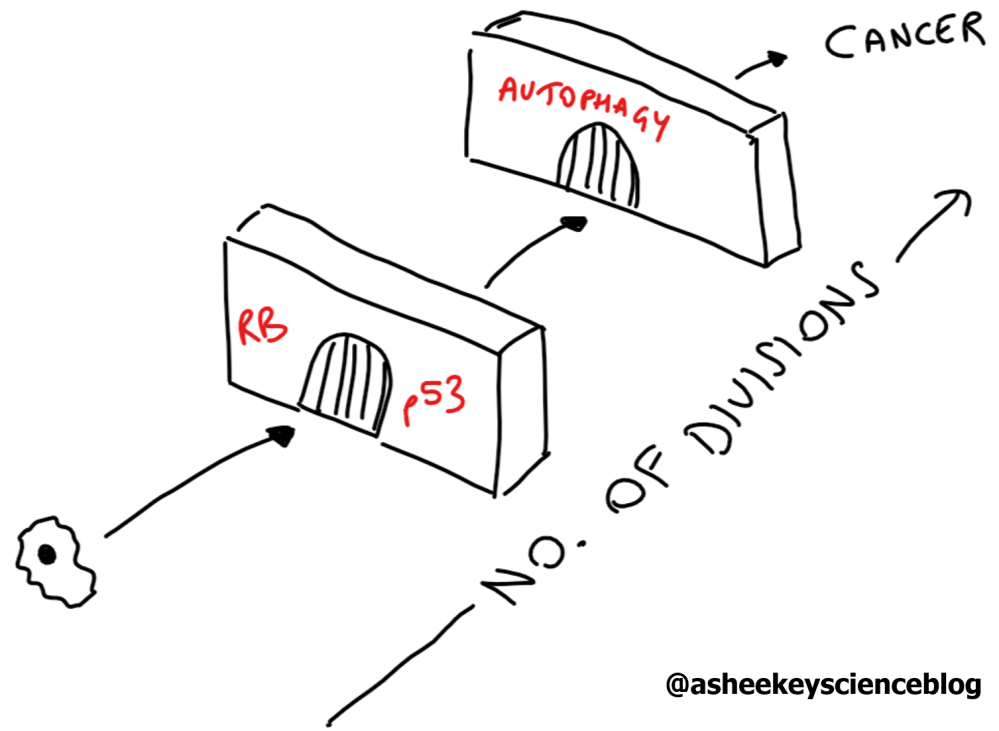 One form of cell stress is DNA damage. DNA contains all our hereditary information and genes to be expressed for a cell to be functional. Protection and integrity of the DNA sequence is therefore crucial for physiological cell behaviour. A particular detrimental form of DNA damage are double strand breaks (DSBs). As DNA is double stranded, the ends of DNA effectively are DSBs (Figure 1). Activation of the DNA damage response is prevented in this situation by telomeres at the end of DNA – repetitive sequences wrapped up with proteins to “hide” the DNA strand ends. (For more on DSBs and telomere structures check out this earlier blog – https://asheekeyscienceblog.com/2018/04/01/guardin-the-genome-a-lncrna-unites-p53-telomeres-and-mirnas/).

Figure 1: DSBs activate a DNA damage response (DDR), but not at the ends of DNA where there are telomeres

However, in most cells, when they divide the telomeres shorten over time. After ~50 divisions, the telomeres are sufficiently short they cause cells to undergo replicative senescence – a state whereby the cell is permanently prevented from dividing. This division limit was named the Hayflick limit. p53 and RB are two proteins activated on senescence that act to prevent the cell cycle and so are tumour suppressive. Loss of these proteins enables a cell to break through this replicative barrier. As before, the telomeres will continue to shorten. Eventually the telomeres will become too short, the ends of DNA can fuse together and cause chromosome mayhem in the cell. The cells have now entered crisis and die (Figure 2). Cells must overcome both the senescence and crisis barrier to become tumorigenic.

Switching on a LAMP

To uncover the mechanisms of cell death in replicative crisis, the team needed to use cells that would readily bypass the senescence barrier and reach crisis. They therefore chose human lung fibroblasts with disabled RB and p53 pathways. Cells in crisis showed many cytoplasmic vacuoles – in particular autophagosomes and autolysosomes – that are key features of autophagy. Literally translated as “self-eating”, autophagy is a cellular process that recycles used and defective cell components. These components are encircled in autophagosomes and degraded in autolysosomes. Autophagy therefore provides a way for cells to conserve energy promoting cell survival. On the flip side though, autophagy has also been shown to result in cell death. It was the latter that was suspected to be involved in cell death during replicative crisis.

By analysing the proteins expressed in cells in crisis compared to non-crisis cells, it was clear that proteins involved in autophagy were upregulated. One of the proteins was LAMP1 – lysosomal-associated membrane protein-1. Importantly, markers of another form, apoptosis, were not detected.

To confirm the involvement of autophagy in crisis the team inhibited other autophagy proteins in the cell (ATG3, 5 & 7) and observed that these cells showed resistance to death. Importantly, the telomeres continued to shorten in these cells. After further divisions these cells showed huge genome instability with many translocations, deletions and abnormal chromosome numbers. Autophagy-induced death of cells in crisis is therefore an important mechanism to prevent this genome chaos from occurring.

How is autophagy activated?

Nassour’s teams work therefore raises caution over cancer therapies preventing autophagy since they could enable more cells to overcome the crisis barrier into uncontrolled proliferation. Since autophagy is also known to be show circadian regulation, it would be interesting to see how time of day impacts crisis breakthrough in vivo.

View all posts by eleanorsheekey